ALRGU is delighted to announce that a next train indicator (NTI) has been installed at Polsloe Bridge. It was funded by ALRUG from GWR’s Customer and Communities Improvement Fund (CCIF) and the Designated Community Rail Development Fund (DCRD).

Train indicators are usually on the platform but at Polsloe Bridge it is located on the path up to the station. This is because Network Rail, who own and maintain the station, said there was nowhere to safely fix it to the almost one hundred year old concrete structure.

Whilst this photo isn’t very good – it has the sun directly behind the indicator and the speed has missed a lot of the display – you get the idea! The train is the 0946 to Paignton on 14th May. 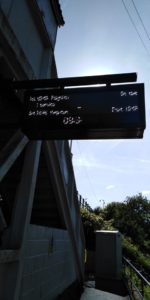 Public address and Wi-Fi have also recently been installed at the station.

ALRUG has raised over £100,000 in the past few years from CCIF (a fund backed by GWR and the Department for Transport (DfT)) and the DCRD (another DfT fund for community rail lines administered by the Association of Community Rail Partnerships and arranged for us by the Devon and Cornwall Rail Partnership).

This entry was posted in Latest News. Bookmark the permalink.