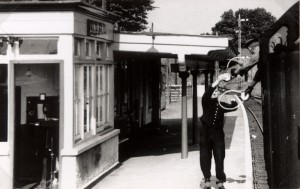 Lympstone today has two stations; the station in the village was renamed Lympstone Village in 1991. Lympstone Commando opened in 1976 to serve the Marine base.

Lympstone Station originally had an assortment of small buildings and a staff of 5, a siding and loop for goods traffic.

Things happen slowly at Lympstone. A Southern Railway era sign was still in use in 1959. The ‘totem’ sign still called the station just Lympstone in 2009, 18 years after the station was renamed as Lympstone Village.