The Avocet Line had an interesting birth, to put it mildly!

For over 30 years, from 1825, schemes were promoted for a line from Exeter to Exmouth. The main aim was to provide a better alternative for the movement of goods from the coast than the hazardous Exe. Topsham Museum has a large and splendid illustration of a new railroad crossing Exminster marshes en route to Topsham – an 1840s scheme that was never built. In July 1855 the Exeter and Exmouth Railway Company’s plans were approved by Parliament, but work was slow in properly starting and it was only on 27th April 1861 that the line was inspected and passed fit by the Board of Trade.

And so, at 7:46 am on May Day 1861 locomotive no 36 and 11 coaches left Exeter’s Queen Street Station (now Exeter Central). Such was the interest that the next train at 10.45 needed two locomotives and 17 coaches. At Lympstone and at Exmouth there were great celebrations, as described in the Exeter Flying Post.

Ownership of the line soon passed to the London & South Western Railway (January 1866). As Exmouth grew business for the line grew, especially with the opening of Exmouth Docks (1868) and the line via Budleigh Salterton and Ottery St Mary (1903). Exmouth became so busy that a splendid four platform new station was built in 1924.

During this period the line carried both passengers and freight, with goods-only spurs to Exmouth Docks and Topsham Quay and a number of sidings. In WW2 a large US Navy depot was built beside and served by the line at Newcourt (now the site of a major housing development and hopefully soon a new station on the line). Large amounts of fish were dispatched from Exmouth and Lympstone to London markets by train until the 1930s.

Sadly during the 1960s the line lost out to use of the car and it narrowly escaped closure by Dr Beeching in 1964 and again in 1967. The line was simplified, to single track with a passing loop at Topsham, a single platform at Exmouth and two or three coach diesel multiple unit trains.

Intermediate stations have interesting histories, well described in Colin Maggs’ detailed description of the line. Stations have both opened and closed, but increased traffic has resulted in new stations at Digby and Sowton and Lympstone Commando, serving industrial parks and new housing and the Commandos’ training centre respectively.

Until the end of operation by the LSWR’s successor, the Southern Railway and then BR Southern Region, trains only ran from Exeter Central to Exmouth. From 1976 the current pattern of services was established, with trains running through to Exeter St Davids, and then on to Barnstaple or Paignton.

ALRUG spearheaded a series of events in 2011 to celebrate 150 years of the line, culminating in a special train on the actual anniversary.

To learn more of the line’s history we recommend Colin Maggs’ book ‘The Exeter and Exmouth Railway’ available from Topsham Museum, booksellers or online. 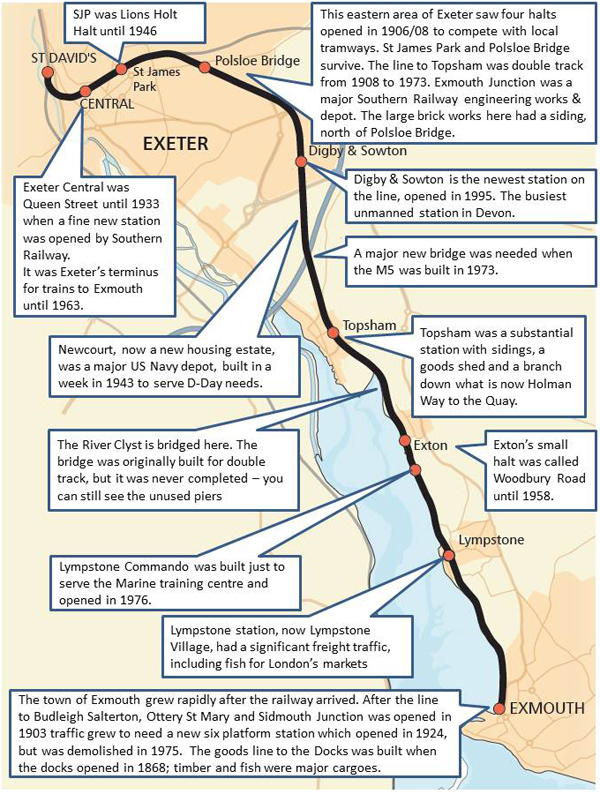