The railway line between Exeter and Exmouth opened in 1861. So 2011 marked 150 years of the Avocet Line! 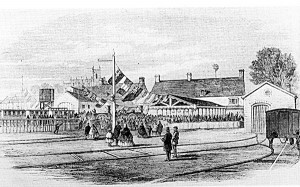 ALRUG played an integral part in formulating a year of special events. It was well supported by train operator First Great Western, local authorities and museums, and individuals who willingly gave their time and expertise to help celebrate not just the history of the line, but also its future.The opening of the Avocet Line in 1861 was marked by great celebrations, with festivities,  banquets and ‘every manifestation of gaiety and joy’, as you can read in the article in the Illustrated London News lower down this page

150 years later ALRUG wanted to match this with our own rich celebration of the line’s heritage and its role in local communities. So we arranged a special train, four theatrical performances, talks and walks, special exhibitions at local museums, two beer festivals and more.

Events ran through April and May, reaching a climax on Sunday 1st May – exactly 150 years since the opening of the line – when a special train (a high speed train) ran from Exeter to Exmouth and back, with celebrations at stations along the line. Many dressed in Victorian costume, and all those who did so were allowed to travel free of charge on the line. A Sustainable Transport Fayre was held in the Strand Gardens in Exmouth which, despite heavy rain, was well attended. The scale of and breadth of the Avocet Line 150th celebrations drew much public attention.

This website has a gallery of pictures of the best of the action.